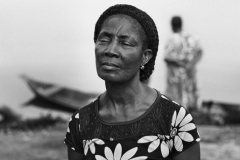 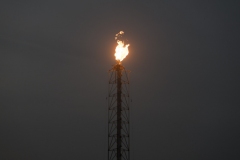 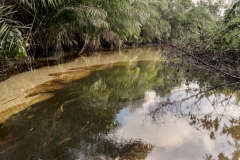 Giclee London and Wex London Gallery presents an exhibition by Arteh Odjidja. As part of the global Rise for Bayelsa campaign, Arteh’s powerful images paint an image of the devastating environmental and human damage caused by multinational oil companies operating in the Niger Delta region of Nigeria.

Frequent oil spills and gas flaring in the oil-rich delta has caused untold damage to the environment and the health of the local people.

A community traditionally farmers and fishermen that were reliant on the Nun River, a distributary of the River Niger to sustain their way of life, has seen rapid depletion of fish, damage to crops and land along the riverside polluted due to oil spills has severely affected the local people and their livelihood, with efforts to contain and clean up spills have mostly gone ignored.

Gas flaring in the area has caused noxious gasses, causing acid rain, bronchial and skin problems damaging the health of people and destruction to their homes. The Rise for Bayelsa campaign aims to amplify the unheard voices of those most affected.

In 2018 & 2019, London based Photographer Arteh Odjidja joined the award-winning Aequitas communications team on assignment to Nigeria, in the southern state of Bayelsa, to capture and document the environmental damage and the lives affected most by countless oil spills. The current State Governor of Bayelsa – Henry Seriake Dickson, an energised advocate for justice and change, launched the campaign in March 2019 – to give a voice to the people of Bayelsa and shed light on the damage caused by the oil industry in the region.

Giclee London are proud to be supporting the exhibition by providing the printing and mounting of all pieces on professional fine art canon lustre paper onto 5mm Foamex.